The Nayabashi Yoichi is held on the fourth Friday of every month, which usually coincides with Japan’s ”Premium Friday.” There is also a market every fourth Saturday every three months (March, June, September and December). The market tries to create an atmosphere like the Japan of old, which is familiar in countries like Laos and Thailand today. 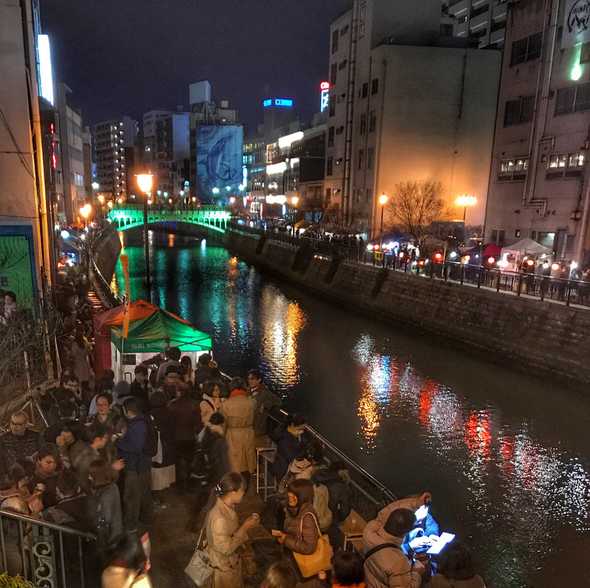 Nayabashi Yoichi Night Market as seen from the bridge

As you draw near to the market, it will be hard to miss the large crowds of people and the traditional Japanese chochin paper lanterns. At the market there is usually live music, performances, food & drink and various shops. 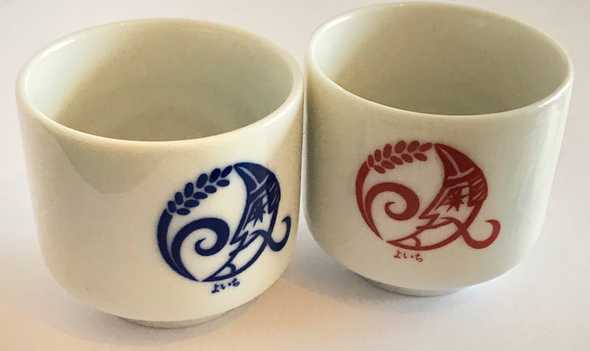 When I stopped went to the market, the theme was a “Japanese Sake Festival.” You needed to buy a sake cup (ochoko) for 300 yen, and then you could buy sets of five tickets for 1,300 yen. There were about fifteen local sake companies offering about fifty different types of sake. 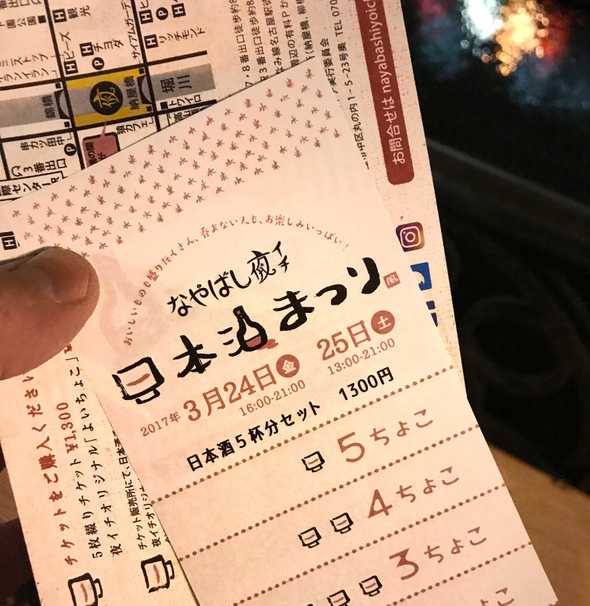 One of my favorite drinks of the night was Tenryo Sake. The flavor was great, and the guy running the booth was very friendly. He lived in The States to study English so that he could promote his family business.

There is a post in English explaining the event on the Nigt Market’s blog: NAYABASHI YOICHI～Night Market at the center of NAGOYA～.

Nayabashi was one of the original “Seven Bridges of Hori River” and it was built in 1610. It was rebuilt in 1886 when it was enlarged to accommodate more traffic to Nagoya Station. The river flows perpendicular to Hirokoji Street and bridge is located almost exactly halfway between Fushimi Station and Nagoya Station.

In the past, the areas along the river were very seedy. While the southern part of the river heading towards Osu Kanon is still lined with love hotels and rather questionable at night, recently, a lot of effort has been made to improve the atmosphere of the area around Nayabashi.

Today, the Nayabashi area is filled with interesting places to explore, like the Okonomiyaki spot Yashiro, the shisha bar Kemuri, the coworking space sharebase.InC and the stylish bar Ylang Ylang.