I received an overwhelming amount of feedback from my two posts about Aspereta (part 1 & part 2) which contain clippings from my blog when I was studying in Japan and developing it in the evenings. Over the years, I’ve considered making another game, but I don’t consider independent game development to be very financially viable. It takes long hours and can be hard to see through to completion, especially when working on online multiplayer games. However, people reached out to me to say that Aspereta had changed their lives, which motivated me.

Additionally, I had two additional fortunate events. First, I started discussing a new game with another talented developer in a neighboring timezone. We both agreed that one of the biggest roadblocks would be art. As most people have noticed, my original art drawn in MSPaint was atrocious.

That’s where the second stroke of luck came in. I reached out to the artist that drew everything for Aspereta and Illutia, Jenn, and asked if I could use the original Aspereta art (before Illutia) for a side project. She graciously said she doesn’t mind!

So, over the last week, I’ve been focusing my evenings on developing a new game called Lost Aeon. 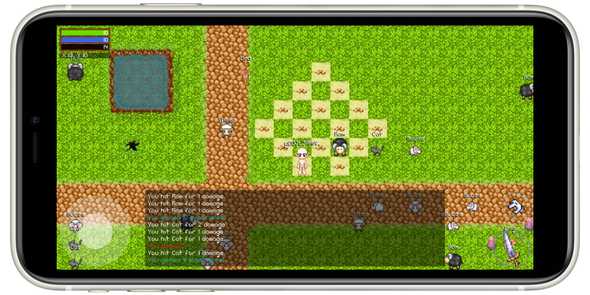 I had been playing with the idea of creating an MMORPG client with React and CSS (Scratching an Itch & Performant CSS Sprite Sheets in React). After lots of learning, it isn’t viable. If I optimized the animations and took more advantage of CSS, I think there would still be too many performance issues or at least challenges in managing advanced game animations with CSS.

So I’ve decided to use a real game engine library to manage the graphics. Currently, I’m planning to build the game using phaser 3 and package it as a mobile game using Apache Cordova. This approach allows me to quickly develop a mobile and desktop/web version of the game. I found several tutorials that use this approach. Since the resources would be packed and loaded locally, performance should be reasonable. As the Lost Aeon evolves, I might need to consider a different approach.