As I’ve mentioned before, twenty years ago, I was an exchange student in Japan. I was in the countryside, and my host family didn’t have the internet. In the evenings, I developed a simple online RPG, called Aspereta, in VB6 and DirectX.

I also kept a blog and wrote an entry for every day that I spent during this year. Going through a back up of the blog, I discovered a trove of old screenshots and dead links. I developed most of Aspereta without an internet connection, so most of the screenshots are of me testing things. I did find one picture screenshot with some other players (Solmon & Spift).

These will only be interesting to a few people in the world, but here they all are. Here are excerpts from my first 19 weeks in Japan, all of 2002.

This was the original logo. The power of Photoshop 6 and bad taste…

I arrived back home a little after twelve and tested my latest programming project out on the net for a little bit that I work on at night from like 9-10 everyday. It works online perfectly; I have only tested it with like three players on at once now though. 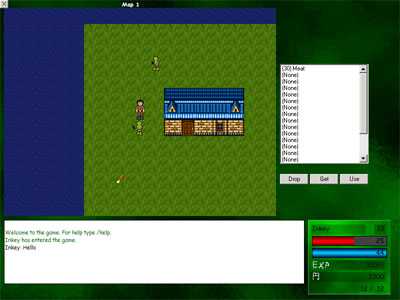 This is the earliest version of the game I have a screenshot of. I wish I could credit the person who made the sample game that I started from.

After this I had lunch and went home. I worked on packing a little more and then on my game until my show was on. My game is rather amazing to me at the moment; it is nearly complete except for a few small things which shouldn’t take much time. After that comes drawing graphics though which is horrible. I am adding some pictures of it today, just because I want to brag.

I looked at what I showed a while back and had to laugh at it… Right now grouping is fully functional too, complete with formulas to divide the exp correctly based on level differences. It ended up being easier to write all my grouping code than it was to display the % for health on everything.

This is part of a sewer area…

This is NPC interaction, which is fully functional now, hoevever I haven’t drawn any armor yet so everyone is naked.

My server logs anything important now along with levels up, world shouts and other various things.

I constructed main parts of the first town and drew a set of four maps for a forest area. Art takes me forever, however putting in about an hour every night and sometimes more on non-school days, my project is coming along very well. You will see a red box that is a target for spells. The game is now fully functional up to about level ten, I haven’t programmed in an armor shop yet though so the monsters hurt a little bit too much.

I made two complete caves, each with six rooms and each cave also has a maze room in it too. Here are some screenshots for everyone.

I spent the rest of the day before and after supper working on my game. I fixed many major bugs today. One bug was in the warrior’s damage calculations, one point of DAM was improving a character’s hit by 50% instead of 5% and there was another bug where when a map had no players on it and then a player walked onto the map, it duped all the items on the map. I also drew a lot of graphics today for items, about fifty to be exact. My armor looks too nexus-y so I might redraw it later.