Today I made a spider cave for players who are around level forty. I drew the spider and made some new terrain tiles for the cave. I also changed the NPC AI a lot. Before the monsters would get as close as they could to the player in a direct line and stop when there were no more direct moves such as a wall or other monster. Today I changed it so that the monsters will move around other monsters and walls to get to the player. It was very difficult to get the code to work right because I tried to write it recursively the first time, but this created an infinite loop and the server’s stack would overflow. I also made some new shops and npcs for the shops.

At home I programmed in new monsters, ghosts, which vary in strength by color, an idea which I don’t believe any other video game has implemented before. I was at a lack of monsters to draw, so I picked ghosts. I added in three new sets of maps, one set for each color of ghost, which combines into one large ‘area.’ I also programmed in paralyze and poison type spells the other day too.

Today after school I programmed my game a bit and changed the npc interface. I also wrote a new spell targeting system that uses the arrow keys and kept the mouse targeting system implemented, however I will probably remove the mouse part to improve the game so the left click selects npcs and the right tells an item on the ground. The arrow keys make it much easier to target and make the magic casting paths in specific much more playable, clicking moving objects was a pain. I programmed in gold as a droppable object too, which is more involved than it sounds.

Part 1 shows the old npc menus in one of the screenshots, it used to be in the right hand column.

The thing that makes people want to play my game will be my ability to draw dragons…or inability.

I went to the library after this and set up my laptop, knowing to turn on the hub, hoping that I would not be yelled at for using my laptop on the school’s network for some reason. Later I looked behind me and the library kids that yelled at me last time had done the exact same thing, I suppose it was a little hypocritical of them to yell at me last time. I fooled around on Nexus a moment or two and then went to the NexusAtlas.com chat room and tried to find TSWolf, who wasn’t on. I waited around and talked to a lot of kids. I talked to some kids from 2-1 who said that today Mr. Kato commented on how my Japanese was much better to my old class. I helped a little warrior on Nexus for about twenty minutes too. After about an hour of doing nothing, it was nearing four-thirty, TSWolf came on. He was in an utterly horrible mood, he was being sort of rude, and I was tempted not to even send him my game so far so that he could consider letting me use his tiles and doing map work for me. When he received the client he was even more skeptical of the quality of my game because I used the ‘grh’ format used in the tutorial I had read, which is a rather interesting way to do graphics that I like and it is also in Visual Basic which is a rather poor language so I could understand that aspect of it. He went on and on about that and other things. At any rate, I proceeded to send the server since I was behind a router and stuff, so that he could host it on his computer. His attitude towards my game changed rather fast, he was impressed with my game. In fact, I almost wonder if he was more excited about my game than I am. I was talking to him more on AIM and I looked down at the Nexus Atlas chat room and thought that this was really funny to see; it went on for a while too, this was just a little clip. I guess the fact that my game is nearly complete fundamentally and just needs more world design and graphics really accounts for a lot.

Note that when he says “Nexus Feel” this is a kind of style that I am going for, however it does differ, I promise.

I worked on my game a lot. I programmed in a new server message system, a filter that prevents users from having certain combinations of letters in their name, such as c, f, u, and k in a different order, finished making gold an object and I made the monsters drop it, and I wrote the code to support the player using weapons and having them look different. This screenshot is the first stage of weapon wielding so I obviously don’t intend to use this sword, since it is a test graphic. I also drew about five more heads and added ‘scroll’ items that change where the character is, such as a return scroll, which returns the player to town. Oh, and one last thing, I rewrote the status key so that it displays information, now including any spells cast on the character and time remaining, on the right hand side. Gah, the real last thing, text now appears over houses, which for some reason took forever to get it to work correctly.

I spent the rest of the day watching the Japanese for foreigners show on TV and programming. Today’s advances are numerous too. I programmed in spell graphics and drew some of the graphics I will use; however I am horrible at drawing spell animations. I drew many more weapon and staff graphics and then changed the system to display them to make it look cleaner. I wrote code to make the weapons move fluently with the characters after that and made it so you can only hold certain keys down, soon after that I crashed and lost a lot of progress. It is amazing how quickly I can program a lot of lines the second time through. I also reduced the speed at which players can cast spell, while trying not to hinder the game play to help reduce much potential lag that this could cause.

I redid a bunch of maps for my game, mainly Minita, the main town, which I had redone yesterday but accidentally saved over it. I hope to knock out a bunch more tomorrow night. I am redoing every map, since some had too many monsters on them and this way I can also make unique room names for every room in a cave and make the set up of the game world a little better. I also added a few monsters that ‘Werm2k’ drew for me, I was going absolutely dead with monster ideas so here are two new types of monsters, werewolves/wolf-men and giant skeleton mages.

I fixed many bugs and added a list of top players that updates each time someone gains a level or stats. It is a top five list right now, but when I release my game I will expand it to ten or twenty. I also made turning sound on and off ‘server-side.’

I woke up early to do a full test of my game. After stomping a few bugs, that weren’t really bugs (I had forgotten a file from the zip), the test was successful. I think by the end of next week I will have a perfectly stable test server running. The working test lasted about an hour until I had to go. One person, RpgWizard made it to level eight; the others reached four and five. There was a bug with grouping that I fixed when someone logged out.

After school, I went to the library and spent about an hour helping one player get the client to work on their computer, it turned out that he didn’t have a sound driver installed, since they had to format yesterday and that was causing an error with DirectX. 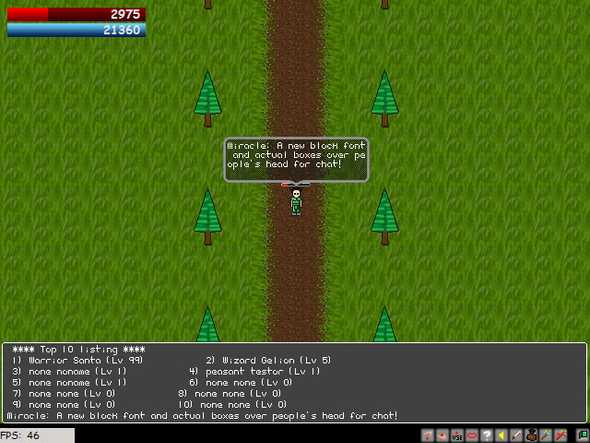 The new font I drew and the text boxes over your head and other cool things like that. I changed the hp/mp bars a little bit too to look nicer.

Prototype tiles and a new target for spells, whee:) The monsters/players will be redone soon!

I worked on the player’s spell list in Aspereta today. They now have nice little icons and stuff (the icons were randomly assigned to test things).

. I am redoing the inventory and making things “drag and drop.” It shows the names of items on mouse over now too. The top row in the picture below are the hot buttons and the thirty boxes below are the actual inventory.

New bodies, bats and sheep. I have female bodies in my game too now. 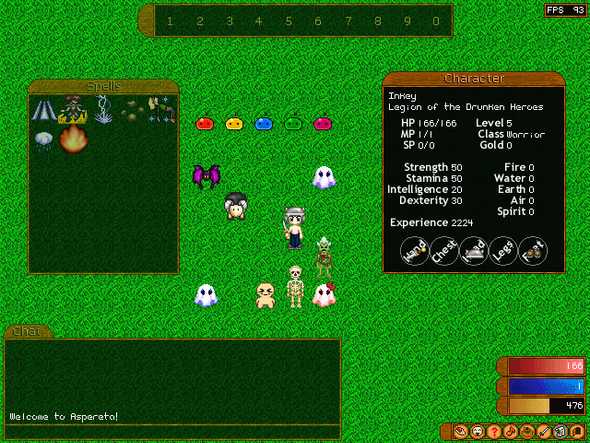 Beginning of the game client written by Brian Justen